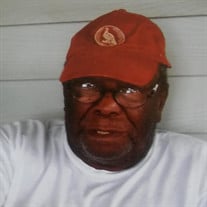 The Beginning Mr. Willie James Wilds was born on December 5, 1930 in Darlington, SC. He was born to Pearlie Alford and was raised by Laurel Sr. and Rendell McNeil Wilds. All are deceased. He was blessed with a big family of brothers and sisters: Lurline Clark, Bernetha Bess, Moses Wilds, Santee Wilds, Freddie Alford, Oneta Whitmore, Janie Depugh, Alice Allen, Danny Depugh, JC Alford, James Depugh, Edward Depugh, Leroy Depugh, Florrie Depugh (deceased), Rosa Mae Wilds (deceased), Robert Lee Wilds (deceased), and Richard Depugh (deceased). The Dash Willie was raised in Darlington but spent most of his life in Midway, NC. He retired from Thomasville Furniture, Plant D. He did part time work at a local block company. He met and married Virginia Mae Tuttle (deceased). The family consisted of a total of 9 children: Curtis Wilds, Pamela Wilds (deceased), Willa Wilds, James Wilds, Charlie Wilds, Emma (Robert) Leonard, Roland Tuttle (deceased), Sandra Richardson, and Jerry (Sadie) Tuttle. He had 17 grandchildren: Dakota, China, Auri, Marquise, Cameron, Jordan, Kaylon, Thad, Horace, Octavious, MonTriumph, Stephanie, Kisha, LaSonya, CaStarla, Dammion, and Yashica, 23 great-grandchildren, and 4 great greatgrandchildren. He was uncle to many nieces and nephews; father-in-law to Carolyn Ruth Tuttle; brother-in law, cousin, and friend to many. Willie was a quiet man. He enjoyed gardening, raising hogs, and working on cars. His Saturdays were dedicated to checking out the local yard sales and flea markets. A man of short stature and few words, Willie had a big heart. He loved people, especially children. The neighborhood children can probably remember the rides on the back of his trucks. Although he was not formally educated in public school, Willie was a teacher. He taught his family his trades. Whether boy or girl, you learned the same. He loved money and was tight with it, unless you were one of the grandchildren. He loved to cook as well. As years passed, Willie began to lose his eyesight. He did not let that deter his purpose in life. He just dictated from the sidelines. He adapted to totally blindness, defeated prostate cancer, and survived a house fire that left battle scars. Even as he began to lose his memory, Willie still held his family and friends high. Until he was no longer able to speak, he would always ask or talk about those who shared in his life experiences. The End Willie James Wilds departed his Earthly home on Monday, March 7, 2016 at the Brian Center of Lexington. Death did not win. Just imagine…he has eyes to see, a mind think, a voice to talk, strength to walk, free from pain, no more scars. Death did not win! We bid you farewell, Willie. Until we meet again… “For it matters not, how much we own, the cars, the house, the cash. What matters is how we live and love and how we spend our dash.” Excerpt from The Dash by Linda Ellis

The Beginning Mr. Willie James Wilds was born on December 5, 1930 in Darlington, SC. He was born to Pearlie Alford and was raised by Laurel Sr. and Rendell McNeil Wilds. All are deceased. He was blessed with a big family of brothers and sisters:... View Obituary & Service Information

The family of Mr. Willie Wilds created this Life Tributes page to make it easy to share your memories.

The Beginning
Mr. Willie James Wilds was born on December 5,...

Send flowers to the Wilds family.