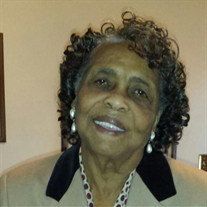 Reflections of Life To everything there is a season, and a time to every purpose under the heaven. ~ Ecclesiastes 3:1~ A Time to Be Born: On April 26, 1935 in Lancaster, South Carolina, Sadie Lee (Bridges) Morris was born to Joe Bridges and Mary Bridges. A Time to Grow: At an early age, Mother Morris accepted Christ and joined Flint Ridge Baptist Church in Pageland, SC. She served on the choir because gospel music was what she really enjoyed. Attending homecoming service in August each year was something she eagerly awaited. It was a time that many former members of the church would come back home to celebrate God and see one another. When she moved to Winston-Salem, NC in 2012, Mother Morris became an honorary member of New Zion Baptist Church. A Time to Plant: Mother Morris planted a virtuous seed in her children and grandchildren. She watered it through encouragement and being a living example. Mother Morris‘s greatest desire was to see all of her family accept Christ as their personal savior and walk in His righteousness. A Time to Love: Mother Morris met the love her life in Charlotte, NC. The two were united in Holy Matrimony on September 26, 1953 in Chesterfield, SC. They were together forty-eight years before his untimely death on April 28, 2001. Nine children were a part of this union; five girls and four boys. A Time to Serve: Mother Morris was a true servant of the Lord. She served God wholeheartedly with her time, talent and substance. Mother Morris was a modern day Hannah. “My heart rejoiceth in the Lord; mine horn is exalted in the Lord, my mouth is enlarged over mine enemies, because I rejoice in thy salvation” I Samuel 2:1. Mother Morris also served her family faithfully. A Time to Enjoy: Mother Morris enjoyed her family, friends, and church family. Her hobbies and interest included singing, shopping, cleaning, drinking coffee and decorating the home. She loved eating ribs, macaroni and cheese, and collard greens every Sunday and collecting “what knots” to decorate the house. A Time to Die: Mother Sadie was called to eternal life on the morning of Monday, April 11, 2016 at Kate B. Reynolds Hospice Home. In addition to her husband Johnnie (Red) Morris, she was preceded in death by her parents Joe and Mary Bridges; four children, Malinda Benson, Johnnie Morris, Jr., Claudette Jennings, and Ricky Morris; grandchildren, Kwan Morris, Angel Brown, and Vernon Brown, Jr.; brothers, Willie, Virtues, Roy, Hazel, and Clyde Bridges; in-laws, Johnnie “Shack” and Pearl “Granny” Morris; sister-in-laws, Margaret Mays and Dorothy Gray; brother-in-laws, Willie B. Morris, Floyd Briscoe, Charles (Chick) Morris, and Boyes Funderburk. A Time to Mourn: Mother Morris leaves to cherish her memory, three daughters, Sandra Heilig (Willie) of Salisbury, NC, Kim Brown (Vernon) of Winston-Salem, NC, and Josie Stallings of Galloway, NJ; two sons, Donald Grier of Salisbury, NC, and Gregory Grier of Charlotte, NC; one sister, Annie Mae Funderburk, Monroe, NC; 16 grandchildren; 19 great grandchildren; sister-in-laws, Annie Pearl McQueen, Albany, NY, Lillie Mae Brisco, Hampton, VA, and Mae Francis Bridges, Pageland, SC; a lifelong friend, Mrs. Margie Hailey; a host of nieces, nephews, other relatives and friends. Mother Morris was loved by all who knew her and will be remembered for her inspiring spirit, laughter, and love for all her family. She was broken hearted after laying to rest her four children. She longed to be with them in heaven. Mother Morris’s favorite quote was, “God will make a way.”

Reflections of Life To everything there is a season, and a time to every purpose under the heaven. ~ Ecclesiastes 3:1~ A... View Obituary & Service Information

The family of Sadie Morris created this Life Tributes page to make it easy to share your memories.

Reflections of Life
To everything there is a season, and a time...

Send flowers to the Morris family.