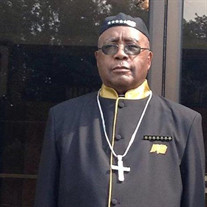 Dr. Robert L. Wise, Sr., 80 formally of Northview street passed away on Friday, July 29, 2016. He was one of 7 children born on December 9, 1935 to the late Herbert Willie Wise and Roberta Elizabeth Wise. He is married to Jessie Jackson Wise and he is the father of four children. He was employed at Bob Neill Pontiac until he accepted his calling into the ministry. Dr. Wise was the Pastor and General overseer of Macedonia Holiness Church of God of the Apostolic Faith Inc. He graduated from Caver High school and went on to attend Piedmont Bible College. Dr. Wise received his Doctorate of Divinity Degree and also received a Doctor of Sacred Theology degree. He held memberships in the Apostolic World Christian Fellowship, Inc. and had both Golden Heritage and Life Memberships in the NAACP. He held membership honors in the Triad Pentecost Network, as a Pentecostal trailblazer for the piedmont triad. He was awarded the Lamp of Truth in May 2013. He was proceeded in death by His parents, five siblings which include his sisters Berta Mae Askew, Earline Wise, Willie Mae Eldridge, Jessie Wise, and his brother Lonnie Lee Wise. Dr. Wise always sought to please God by offering to people the word and truth about living a truly rich life in the spirit. He is the author of the Book of Light and although being criticized he taught that Jesus lives in you according to I John 4:4 and leaves his family to continue to carry out this great message to all. He is survived by his wife Jessie Jackson Wise, four children Samuel Wise (Ikuko) Jackson of Japan, Jerry (Debra) Wise, Robert Wise Jr., and Marian Wise all of Winston-Salem NC. 13 Grandchildren, Latarsha Jeter, Samuel Neil Jackson, Jr., Joy Jackson all of Winston-Salem NC, Maguna Jackson of Japan, Jerrica Wise, Jerilyn Wise, Jason Wise, Jared Wise, Joshua Wise, Victoria Wise, Raven Wise, Eric Wise, and Rayshawn Wise all of Winston-Salem, NC. Great Grandchildren, Brandon Jeter, Brittany Johnson, and Payton Elizabeth Jackson. 2 Brother in Laws, Rosevelt (Betty) Bennet and Richard Jackson. Nieces, Emma Owens, Debra Askew, Diane Askew and Patricia Owens and Nephews Jessie Askew, Eddie Davis and Michael Owens. And a devoted family friend Troy Sullivan. Host of other relatives and friends. The love he had for God’s people is unexplainable and he expressed his concerns not only for his physical family, but his spiritual family as well. His family is strong because of the foundations in word that he had built and the word that he had planted within them that they can never forget.

Dr. Robert L. Wise, Sr., 80 formally of Northview street passed away on Friday, July 29, 2016. He was one of 7 children born on December 9, 1935 to the late Herbert Willie Wise and Roberta Elizabeth Wise. He is married to Jessie Jackson Wise... View Obituary & Service Information

The family of Dr. Robert L. Wise,, Sr. created this Life Tributes page to make it easy to share your memories.

Send flowers to the Wise, family.