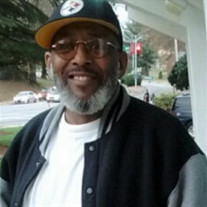 Ricky Leornard Collins, 63, passed on March 3, 2017. He was born in Rocky Mount, NC to the late Leonard Millburn and Thelma Collins. Ricky was a graduate of Chichester High School in Boothwyn, Pennsylvania. While attending he was an exceptional... View Obituary & Service Information

The family of Mr. Ricky Leonard Collins created this Life Tributes page to make it easy to share your memories.

Send flowers to the Collins family.