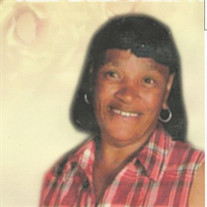 Odessa Denise Priester Howard, 56, 2219 Shannon Street, Raleigh NC passed on Februaray 16, 2016 at her residence. She was born November 15, 1959 in Forsyth County to Odell Jackson and Thelma Green Robinson. She was a Case Manager for the homeless... View Obituary & Service Information

The family of Odessa Denise Priester Howard created this Life Tributes page to make it easy to share your memories.

Send flowers to the Howard family.