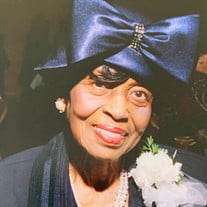 Susie Jones Drayton, 101, was born December 19, 1919 in Ellenwood, Georgia to father, Pleas Patrick Jones, and mother, Bertha Freeman Jones. She departed this life on Friday, January 15, 2021 at her home due to natural causes. Mrs. Drayton graduated from Booker T. Washington High School in Atlanta, Georgia and continued to receive a bachelor’s degree in English from Spelman College, also in Atlanta, Georgia. She was married to the late Rev. Dr. Jerry Drayton on May 29, 1946. Life Of Dedication She worked as a secretary at the VA Hospital in Tuskegee, Alabama, after college and worked for 31 years for the Forsyth County Agricultural Extension Service. Mrs. Drayton was the wife of the pastor of New Bethel Baptist Church for 62 years. She devoted much of her free time to activities at the church and was actively involved with community organizations centered around youth development. She spearheaded an adult literacy program at New Bethel Baptist Church, soon after arriving in Winston-Salem. She also established the Journalistic Society at New Bethel, started the Spotlight church newspaper and developed Youth Day. Mrs. Drayton was instrumental in starting two events that continue at New Bethel to this day—the Annual Fellowship Day in September, which precedes the start of Revival in September and Race Progress Promoters Day, which is an outgrowth of her idea for Race Progress Day. She is preceded in death by her husband of 66 years, Rev. Jerry Drayton, pastor emeritus of New Bethel Baptist Church. Precious Memories She is survived by her son, Attorney Jerry Drayton, her daughter-in-law, Dr. Wilma T. Drayton, nephew, Eric Johnson and his wife, Gayle, her devoted caregiver, Shirley Lewis, God-daughter Brenda Witherspoon and a host of other nephews, nieces, relatives and friends.

The family of Mother Susie Jones Drayton created this Life Tributes page to make it easy to share your memories.

Send flowers to the Drayton family.