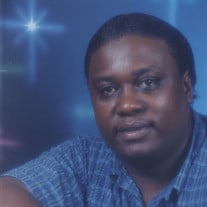 Kenneth Lenard “Kenny” Ray Ingram Sr. was called home to be with his Lord on Wednesday, July 27, 2016 at his residence in Winston-Salem. He was born to the late Betty Jean Ingram and Henry “Pete” Porter on November 14, 1967 in Winston-Salem. Kenny Ray attended public school in Forsyth County. He was employed at Novant Health Forsyth Medical Center and Food Lion at the time of his death, and was eagerly planning to attend school to become a professional truck driver. Kenny Ray was a faithful member of Second New Bethel Baptist Church where he supported the senior pastor as an armor bearer, and served on the usher board and male chorus. His life was a testimony of his love for Jesus Christ which he often expressed in song. Kenny Ray wore an infectious smile that won the hearts of Food Lion patrons, especially the senior citizens. He epitomized the best in customer service as he graciously escorted them to the aisle to locate a food item. The meat department was his work station, but his assignment was a higher calling to help others with humility. Kenny Ray was an awesome cook and grill master. He was renowned for toiling for hours preparing mouth-watering meals for friends, loved ones and special occasions. It was a labor of love with his trademark smile always on the menu. Fish would also likely be on the menu, particularly after a great catch at his favorite spot. Kenny Ray was indeed Christ-like in his esteem for children. “Jesus said, ‘Let the little children come to me, and do not hinder them, for the kingdom of heaven belongs to such as these.’" – Matthew 19:14 Kenny Ray was preceded in death by: his parents; grandmother, Dora Moore; brother, Curtis Anthony Porter; and niece, Sabrina Denise Porter. Kenny Ray is survived by sons: DeAngelo Larkin of Arkansas; Olajawan Hairston, Kenneth “Lil Kenny” Ingram Jr. and Carl Bostic, all of the city; two brothers, Gary Ingram of Sauk Valley, Illinois and Keye Porter of the city; two sisters, Robin Porter Pendleton of Boca Raton, Florida and Myra Porter Smoot (Dwight) of the city; three uncles, Sylvester “Spunky” Moore, Robert Moore and Dwight “Wayne” Moore, all of the city; one aunt, Vera “Niece” Moore of the city; nephews, Rico Porter, Charles Porter, Kedrick Gibson, Antwain Porter Sr., Devon Plater and Antwain Porter Jr., all of the city; three nieces, Dominique Barksdale and Saharia Porter of the city and Malaya Divorce of Greensboro; fiancée, Renee Fields, plus a host of other relatives and friends.

The family of Mr. Kenneth Lenard "Kenny" Ingram Sr. created this Life Tributes page to make it easy to share your memories.

Kenneth Lenard “Kenny” Ray Ingram Sr. was called home to be with...