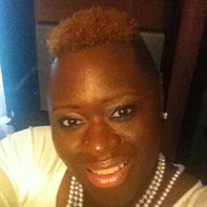 "For you created my inmost being; you knit me together in my mother's womb. I praise you because I am fearfully and wonderfully made" (Ps.139:14). Karen Demetria Lee, aka "Dootsie and K-Lee," the daughter of the late Joseph Lee and Queen Esther Lee Ford, was born on July 14, 1969 in Manhattan, NY. She was raised in South Carolina and later relocated to Winston-Salem, NC. Karen attended Mt. Tabor High School and graduated in 1987. She then attended Brookstone College of Business and received her certification for Phlebotomy in 2010. In 2017, Karen completed classes and received her certificate for fostering and adopting children. Karen was employed with the New York City's Department of Corrections. Upon relocating to Winston-Salem, NC, she was employed with Wachovia Bank. She moved on to Forsyth Hospital (Novant Health) where she worked for 19 years. She also worked for LabCorp. She was a team mother for Queen's track team and worked as a consultant for MaryKay. She later pursued her passion for natural hair at Elegant Tresses, as a hair stylist. "Before I formed you in the womb I knew you, and before you were born, I consecrated you" (Jer. 1:5). Karen accepted Christ as her personal Savior and dedicated her life to serving Him and others. As a member of St. Peter's World Outreach Center, Karen sung on the choir, praise team and diligently invested her time and heart with the youth group. Karen was a people's person and truly understood that "laughter doeth good, like medicine". Karen never met a stranger. Whenever you were in her presence, laughing was guaranteed. She was a natural born comedian and used that gift to draw people to Christ. Along with laughter, Karen was also an encourager and motivator. She was full of the Holy Spirit and used the wisdom He provided, to impart that wisdom into the lives of those she knew and encountered. Apart from her love of Christ, Karen's love for her family flowed without measure. Her children Erick and Queen and granddaughter Kyndall were truly her greatest joy. The life of Christ that she modeled before them, is one to be proud of and her legacy of love and dedication to Christ will be carried out through them and other members of her family. "Precious in the sight of the Lord is the death of His faithful servant" (Ps. 116:15). Karen Lee passed from death to eternal life on November 12, 2017, at Wake Forest Baptist Hospital. Before her passing, God used Aplonia King as a Good Samaritan towards Karen and for her act of kindness and care we are grateful. Karen had a desire to be married, and on Sunday evening, the bridegroom came and now she's forever united with Christ. Loved ones left to honor and continue her legacy of love; children Erick Lamar Lee and Queen Dachanelle Lee, affectionately known as Miracle of Winston-Salem, NC; granddaughter Kyndall Lee of Winston-Salem, NC. Two sisters, Janice Crosby of Andrews, SC and Cynthia (Wayne) Smiley of Peekskill, NY. Three brothers, Joe Lee of Rochester, NH, Gregory Lee and Stan Lee of Stone Mountain, GA. Maternal family, one aunt, Mary Scott of Rochester, NY; Three uncles, Padin Tisdale and Herman Tisdale of Andrews, SC and Otto Tisdale of Troy, NY. Paternal family, one aunt, Betty Jean Tisdale of Miami, FL; one uncle, Willie James Davis of Manhattan, NY. A special friend and sister, Songa Leopold-Fultz of Winston-Salem, NC. A special person, whom she called an aunt, Evangelist Brenda Kearney of Winston-Salem, NC; Two special adopted sons, Simon Leopold of Orlando, FL and William (Neka) Sherard of Winston-Salem, NC; a host of dear nieces, nephews, friends and other relative

"For you created my inmost being; you knit me together in my mother's womb. I praise you because I am fearfully and wonderfully made" (Ps.139:14). Karen Demetria Lee, aka "Dootsie and K-Lee," the daughter of the late Joseph Lee and Queen... View Obituary & Service Information

The family of Karen Demetria Lee created this Life Tributes page to make it easy to share your memories.

&quot;For you created my inmost being; you knit me together in my...

Send flowers to the Lee family.