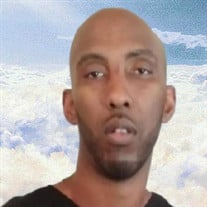 Mr. Joseph Gause IV, 34, affectionately known as “Twiz”, passed away unexpectedly on April 24, 2022, in an automobile accident. Mr. Gause was born on July 13, 1987, in Raleigh NC, to his proud parents Joseph and Alfreda Gause. Mr. Gause relocated to Winston Salem with his parents at an early age. He attended the local public schools and began to hone his skills in the food service industry in his teenage years. Mr. Gause was a faithful employee of the McDonalds Restaurant chain, having completed the course of study for management at McDonalds University. He was employed at multiple locations for the company and at his passing he was a shift manager at the Robinhood Road location. Mr. Gause developed a passion for sports at an early age. Him and his younger brother Prince (Fat Daddy) were Principal players for both the Tiny Indians Football organization, were he currently coached and the Twin City Little League baseball organization. He took his love for sports into adulthood as a sponsor and player for one of the best adult football teams in Winston Salem, “Pound Game”. Even great than his love for sports was his love for his children whom he loved and wanted the very best for. Joseph was proceeded in death by his Father Joseph Gause III and his brother in spirit Mr. Kendrick (Rocco)Smith. He leaves behind to cherish his memory, his Mother Mrs. Alfreda Gause of the home, Nine Children Joseph, Jaden, Kennedy, Josiah, Jahaun, Jashawn, Joel, Amir, and Johannon. Brothers Charles Bracey and Prince Gause. Sisters Eleanor (Chris) Green, Money Cannon, and Tracy Phillips. A devoted niece and nephew Brandon Jackson and Laprecia Long. Aunts Mary Mood, Helen Bracey, and Molly (Robert) Cunningham. Uncles Michael and Jeffrey Gause and host of additional nieces, nephews, and cousins. Twiz was loved by so many, and the family would like to recognize his special friends Danielle, Gwyna P., Ashley D., Janae P., Tenika H., Tia, and Kevin and Ms. Jackie Smith and the entire Smith family. Nard Parker, Tim Ford, Boobie Plater and the entire “Pound Game” organization. Demetrice Leach and the McDonalds Corporation. Funeral services will be held on Sunday May 1,2022 at New Hope Missionary Baptist Church. Visitation will begin at 2:00pm followed by the funeral at 3:00pm. Minister Norman Graham will be officiating. Funeral services have been Gilmore Memorial Funeral Services . The family would like to thank everyone for the love and support during this time of bereavement. Please keep us in your prayers.

The family of Joseph "Twiz" Gause IV created this Life Tributes page to make it easy to share your memories.