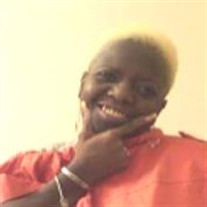 Jacqueline Ann “Jackie” Johnson was granted her wings on Sunday, May 27, 2018 at Wake Forest Baptist Medical Center. She was born on August 14, 1952 in Winston-Salem, North Carolina, to the late Mariam Johnson Shipp and Sammy Bloom. She attended school in Forsyth County and graduated from Parkland High School. Jackie was an employee of WFBMC in Laundry Services for many years. She later worked for the Winston Salem Forsyth County Schools System as a School bus Driver where she later retired. Jackie was a devoted member of New Jerusalem Missionary Baptist Church , where she is known for one of her most famous sayings, “You in the Book, Doc!”. She played an integral part in the music ministry, and was a faithful choir director and member to several choirs. Jackie was very passionate about working with the youth of New Jerusalem. She was a dedicated leader on the Jr. Disciples later known as the Youth Mass Choir. She was also a member of the Hospitality Committee. Jackie enjoyed people, and never met a stranger. Everywhere she went, she was guaranteed to know somebody. She loved music with Quartet being one of her most favorite genres. Jackie and her crew are known to jump in the car and hit the road to go hear some quartet music. She was preceded in death by her parents, and a brother Michael Shipp. She is survived by one son, Tobias Johnson of the home, a daughter, Debra Lazenby; One brother, Henry Shipp, Jr.; two sisters, Vanessa Carter and Sherylynn (Barry) Webster. Jackie has 5 grandchildren, Brittany, Kekoa, Tobias Jr., Tobias III and Malaya; one aunt Belma Johnson Dobson; five nieces and one nephew and a host of great nieces and nephews, cousins and adopted family and friends.

Jacqueline Ann &#8220;Jackie&#8221; Johnson was granted her wings on Sunday, May 27, 2018 at Wake Forest Baptist Medical Center. She was born on August 14, 1952 in Winston-Salem, North Carolina, to the late Mariam Johnson Shipp and Sammy Bloom.... View Obituary & Service Information

The family of Jacqueline Ann "Jackie" Johnson created this Life Tributes page to make it easy to share your memories.

Jacqueline Ann “Jackie” Johnson was granted her wings on Sunday,...

Send flowers to the Johnson family.