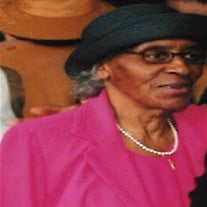 Obituary of Mrs. Irene Henderson Hargrave Mrs. Irene Henderson Hargrave, 89 formally of Zane Perkins Drive passed away on Wednesday, July 13, 2016 at Alston Brooks Nursing Facility. She was one of 12 children born November 30, 1926 to the late John Henderson, Sr., and Drusilla Owens Henderson. She was married to the late Clarence Nathanial Hargrave, and the mother of 7 children. Irene was reared in a Christian home where her father was a dedicated member of First Baptist Church, and her mother a dedicated member of Files Chapel Baptist Church. Irene and several of her siblings at an early age made their commitment to attend and serve at Florida United Holy Church. She attended the old Dunbar High School, and completed the 9th grade. She lived her life committed to love and serve God, and being a gracious supporter to her husband, children, grandchildren, siblings and others. She reared her children to serve the Lord, and lived a Christian life before them. Her love for other children extended beyond her birth children with her neice, Louise Henderson Pipkins who lived in her home after Irene’s sister Margaret passed. All of her nieces, nephews and family friends were nurtured and loved all the same. She was a humble, kind and soft spoken lady, and will be greatly missed, but has left a legacy of hope for all who knew her and was a part of her life. She loved and supported her church and was willing to do anything she could to support the former Pastor, Elder Fred T. Jones, Sr. and First Lady Idella Jones. At her church she served as a Missionary, Hospitality worker, and a choir member. She continued to faithfully send her tithes and offerings to support the church, even after her abilities to attend were limited. She loved her church family at Gospel Tabernacle United Holy church where her son serves as the Senior Pastor. Preceded in death her parents, husband, 2 children Evelyn Hargrave, Hardy James (Diane) Hargrave, 3 grandchildren Clarence Franklin Jr., Sterling and Prestin LeMar Hargrave, siblings John Jr., Charlie, Owens, Baxter, Raymond, and Margaret Henderson, and Elizabeth Leverette. Those she leave to carry her torch of love are her children, Clarence Franklin (Kymn) Hargrave of Douglasville, GA, Gail Hargrave, Ricky (Debra) Hargrave all of Powder Springs, GA, Vera (Mike) McRae of Lexington, NC, and Bishop Greg (Kim) Hargrave of McLeansville, NC. Grandchildren, Steve Owens, Joseph Hargrave, Atlanta, GA, Cory Hargrave, Savannah, GA, Jasmine Hargrave, Lexington, NC, Ashley (Daniel) Roche, Nathan Hargrave, Atlanta, GA, Kara McRae, Greensboro, NC, Michael McRae, Jr., Charlotte, NC, Kiara (Marcus) Harris, Greensboro, NC, Chasity Hargrave and her Fiancé Shawn Anthony, Mebane, NC, Chelsey Hargrave, McLeansville, NC and Ashleigh Taylor Hargrave, Winston-Salem, NC. Great-grand children, Jalon McMillian, Atlanta, GA, Karson and Karmen Harris, Greensboro, NC. Her siblings, Louise Owens, Temple Hill, Maryland, Robert Henderson, Frank (Elizabeth) Henderson, and Harvey Henderson all of Lexington, NC. All of her nieces, nephews, in-laws and longtime friends were among the special people who enriched her life “TO GOD BE THE GLORY FOR THE THINGS HE HAS DONE” The Funeral Procession will leave at 9:30am on Saturday, July 16, 2016 from the home of the Daughter Vera McRae 430 East 9th Street Lexington NC 27292.

The family of Mrs Irene Henderson Hargrave created this Life Tributes page to make it easy to share your memories.

Send flowers to the Hargrave family.