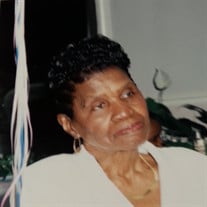 My Sweet Jesus Called our Mother Home on February 18,2015 Mrs. Grace Puryear Wright is the youngest of four children born to Mr. Richard William Puryear and Iteria Boston Puryear on April 1, 1920. She married Mr. James William Wright in 1936 and during this union of 60 years they were blessed with six children; three Daughters Brenda ( Marion) Dubose of the city; Gwendolyn L. Wright and Sharon D. Wright of the home; one Son Bernard N. (Norma) Wright of the city,Mrs. Wright was preceded in death by her husband James William Wright ,two sons and two daughter in laws; James Valez Wright and Richard ( Mable )Wright, one son in law; Marion Dubose, two Great Grand Children; Vernon Joyner Wright,and Antoine L. Wright her parents and siblings. Mrs. Wright lived most of her life in Forsyth County and attended Kimberly Park Elementary and graduated from Atkins High School. Mrs. Grace Puryear Wright was a faithful and dedicated employee of Thomasville Furniture and BellSouth Communications with a combined service of 30 years. She was a faithful member of the Boston Roundup Committee where we as members received a lot of information about the community. Mrs. Grace Puryear Wright joined New Bethel Baptist Church under the leadership of Reverend Hamlin and Reverend Gilmore. She later joined Friendship Baptist Church in 1960 attending until her health declined . Mrs. Wright along with her husband lived in the Boston Community for nearly 53 years in the same home where their children grew up and began to have their own families. When redevelopment claimed their home they moved to the Ludwigh Community where she continued to live as a loving friend and neighbor. Mrs. Grace Puryear Wright leaves to cherish her memories; 17 grand's, 39 great grand's, 22 great, great grand's,.Extended family members Mr. Weldon Stroud, Jr., Mr. Hansel Hentz, Mrs. TCora Dubose, Mrs. Faye Blair and a host of other cousins, relatives and friends. Funeral services will be conducted 1:00 on Saturday February 28, 2015 at Friendship Baptist Church . Interment will follow in Evergreen Cemetery. The family will receive friends from 12:00 until 1:00 at the church. The funeral cortege will assemble and leave from the residence. Arrangements entrusted to and services will be conducted by Gilmore Funeral Home

The family of Mrs. Grace Puryear Wright created this Life Tributes page to make it easy to share your memories.

My Sweet Jesus Called our Mother Home on February 18,2015

Send flowers to the Wright family.