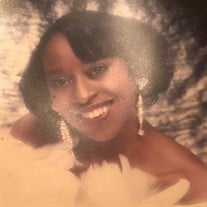 Mrs. Genina W. Tindal Massey was born on March 27, 1964 in New York City. She passed away unexpectedly on June 3, 2019 at Baptist Hospital. She was a graduate of Parkland Senior High School, class of 1982. She worked for the Forsyth County School... View Obituary & Service Information

The family of Mrs. Genina W. Tindal Massey created this Life Tributes page to make it easy to share your memories.

Send flowers to the Massey family.