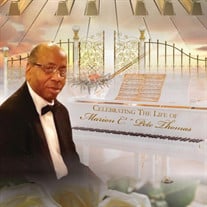 Courage, faith-filled, and strength are all words that describe Dr. Marion C. “Pete” Thomas, who went from Labor to Reward on Thursday, March 11, 2021 with his loved ones by his side. He was born April 2,1950 to the late Rev. Hansel Frank Thomas Sr. and Mother Ethel Elizabeth. Affectionately known as “Pete”, Dr. Thomas attended Winston-Salem/Forsyth County Public Schools, and graduated from Simon G. Atkins High School. He attended Winston-Salem State University, receiving his Bachelor's and later received Master’s degree in Administration and his Doctoral Degree. Dr. Thomas was a faithful member of Bethlehem Missionary Baptist Church, where he served as Minister of Music for over 30 years. Under his leadership as Minister of Music, he started a Children’s Choir which is still active today, organized the Youth Adult Choir now known as the W. M. Inspiration Choir, was a faithful member of the Intercession Prayer Ministry, and the Missionary Ministry. Dr. Thomas also served as the Minister of Music for First Baptist Church-Highland Avenue of Winston Salem. His musical career spans for a century including teaching music to numerous groups and organizations while also receiving numerous awards. Dr. Thomas was a firm believer in the spirit of excellence and dignity, placing pride aside as a Masterful Pianist and Organist. He was a faithful contributor to the Gospel Music Workshop of America, founded by James Cleveland, for many years. In addition to a musical genius, he was a talented florist, serving at Jan’s Florist of Winston-Salem and as a Licensed Funeral Director Gilmore Memorial Funeral Homes for over 25 Years. Dr. Thomas was no stranger to Music Ministries or the Hammond Organ specifically, serving many churches, choirs, congregations in the Triad to include St. Stephen’s Baptist Church of Winston-Salem, Shiloh Baptist Church of Winston-Salem, First Emmanuel Baptist Church of High Point, First Baptist Church of High Point, Kimberly Park Holiness Church of Winston-Salem, Ambassador Cathedral of Winston-Salem, New Bethel Baptist Church of Winston-Salem, Goler Metropolitan AME Zion Church of Winston-Salem, Grace Presbyterian Church of Winston-Salem, the B.F. Daniels Gospel Choir, Union Baptist Church of Winston-Salem, The People’s Choice AME Zion Church (now St. James Wesley AME Zion Church), Foster Grove Baptist Church of Jamestown, the award-winning Winston-Salem State University Gospel Choir, and many many more. In addition to churches and congregations, he was the primary organist for the National Black Presbyterian Caucus Committee Revival of March 1998 held at Grace Presbyterian Church and was also the former accompanist for Voices of God's Children Choir at Grace Presbyterian Church. Throughout his life Dr. Thomas was a part of many church programs, city-wide events, and weddings. Never would he let you down unless it was a scheduling conflict. Dr. Thomas served as a Professor of Music at Winston Salem State University and Wake Forest University. At Winston-Salem State University, he was an intricate part of the Upward Bound program and inspired the future of many students for countless years. He was honored by many community organizations to include the National Women of Achievement, Inc. and Winston-Salem State University Department of Athletics. The receipt of many awards and achievements to include 1992 WALJO Award, 1992 Gospel Hall of Fame Award, and N.C.G.C.C.,to name a few. This is just a small account of the many contributions “Pete” made to many churches, communities and organizations of the Piedmont-Triad Area. Dr. Thomas took joy in teaching others cantatas, hymns and the Hallelujah Chorus he performed for many years in the Gospel Music Workshop of America, to which he was a member and instructor. He taught many workshops and took pride in helping others perfect their musical gifts. He encouraged them that through Christ they were more than enough and they could do anything that they put their heart, mind and work into. Throughout his life he used his God given talents to write multiple songs and plays for several people including his group, The Queenette Gospel Singers and MPT’s. Specifically, he wrote a song entitled “Fill My Cup” and wrote and directed the play entitled All for Me. He also served as the Choreographer for the Winston-Salem State University Class of 1977 Marching Band. Without question, Dr. Thomas will be missed within the Piedmont-Triad Community, particularly Winston-Salem, and in the lives of those who he bestowed the gifts of Love, Wisdom, Tolerance. His Precious Memories Dr. Thomas leaves a legacy of showing others how to achieve greatness while always letting you know that it's only because of God. His favorite time of the year is Christmas. He was an excellent cook and absolutely loved family time which often included dancing, laughing, joking around, traveling, singing, and praising God. He encouraged everyone to get their education and that knowledge is power, as coined by the United Negro College Fund motto, “A Mind is a Terrible Thing to Waste”. He was a devoted brother, son, friend, uncle, musician, counselor. Dr. Thomas leaves to cherish his memories one sister, Mrs. Iantha (Deacon Charles) Jenkins of Lexington; brother, Mr. Hansel F. Thomas, Jr. of the city; one sister in love Ms. Helen Thomas of the city. Three Faithful God Sisters Mrs. Mag (Deacon Frank) Oglesby of the city, Ms. Viola Thompson of the city, Ms. Gloria Jean Jackson. Personal healthcare team Ms. Dexteria Jenkins and daughter Alona, his“Wife” Dwanna Agnew, “Daughter,” Shameka Hillian; nephew, Joshua Thomas, nieces Dr. Telisha Roberts (Nelson Sr.), Tonya Thomas, Cassandra Thomas; cousin, Carol Samuels; a host of loving caregivers to include the Bethlehem Missionary Baptist Church Nursing Ministry, and many loving nieces, nephews, cousins, and dear friends. Special thank you to Dr. Rebecca Omlor, Dr. James Pirkle Jr. and Northside Dialysis Staff.

The family of Dr. Marion C. Pete Thomas created this Life Tributes page to make it easy to share your memories.

Courage, faith-filled, and strength are all words that describe...

Send flowers to the Thomas family.