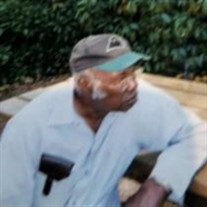 Clarence Leroy James put off his earthly house and put on his eternal house on December 28, 2020, at Forsyth Memorial Hospital in Winston-Salem, North Carolina.He was born in Garnett South Carolina to the Late Herbert James and Anna Scriven... View Obituary & Service Information

The family of Clarence James created this Life Tributes page to make it easy to share your memories.

Clarence Leroy James put off his earthly house and put on his...

Send flowers to the James family.