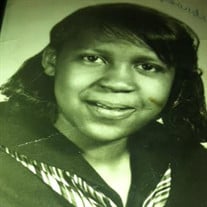 Life Profile Yea though I walk through the valley of the shadow of death I will fear no evil for thou art with me; thou rod and thy staff they comfort me Psalm 23:4 Our beloved mother, sister, auntie, and ‘Ma” Cassandra Wright was born on September 14, 1949 in Winston-Salem to the late Annie Vance (Claude Harris) and Alexander Truesdale. She heard a voice say, “Well done my Good and Faithful servant and went home to be with the Lord on Wednesday February 11, 2015 at Wake Forest University Baptist Medical Center. Ms. Wright was preceded in death by her son Howard Wright, two brothers, Robert Harris and Claude, Jr. all of Winston –Salem, NC. Cassandra was affectionately called ‘San” or “Ma:” She was a graduated of Forsyth Technical Community College. She was a loving mother and grandmother. San was a devoted worker of Blue Bird Cab for 22 years and Willard’s Cab Company for 25 Years. Cassandra was a faithful member of Stokesdale Church of God until her health failed. Ma leaves to cherish her loving memories and legacy of her love to four sons Anthony, Tony Jr., Lonnie, and George Wright all of Winston Salem, NC three brothers Bennie L. (Deborah) Harris, Tracey Truesdale all of Winston Salem, NC David Harris of South Carolina, ten grandchildren Shawonda Wright, Rashaun Bethea,, Porsha and Bria Morrison, Bernard Wilson, Tanisha Wright, G’ Varus and William Morgan, Isaiah Campbell and Mikeala Brown, six great grandchildren, K’Mya, Kassim, K’Siiya Wynn, Jeremiah Davidson, Jhontae Wilson and Brielle Morrison all of Winston-Salem, NC also a devoted aunt Betty Lee Vance and a host of nieces, nephews other relatives and many friends.

Life Profile Yea though I walk through the valley of the shadow of death I will fear no evil for thou art with me; thou rod and thy staff they comfort me... View Obituary & Service Information

The family of Mrs. Cassandra Wright created this Life Tributes page to make it easy to share your memories.

Life Profile
Yea though I walk through the valley of the shadow...

Send flowers to the Wright family.