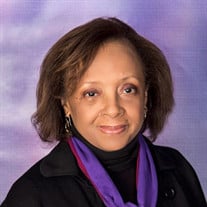 Benita Brickhouse passed away at home in Ohio shortly after celebrating her 70th birthday. She was born June 30,1951 in Detroit to Lee Ethel Williams Brickhouse and George H. Brickhouse. She chose her final resting place beside her mother and grandmother Clara in Winston Salem. A graduate of Mumford High School, Benita attended Shaw and U of D before earning her bachelor’s degree from Lawrence Technological University. She later earned a master’s degree from Central Michigan University. Benita embarked on a career that included General Motors, where she rose through the corporate ranks. She moved several times in the Midwest as she advanced while working extensively with GM dealerships. She often earned awards and recognitions as the top sales rep in her region. She held positions as Fixed Operations Development Manager and GM Area Part Manager before her retirement. Benita became a member of Delta Sigma Theta (DST) in 1971. She pledged as an undergraduate at the University of Detroit. She later served as a representative for the Mighty Midwest Region and as the Evansville, Indiana Chapter president. She supported numerous Delta programs and activities, particularly those by the Detroit Deltas. She was especially pleased to support its commemorative brick campaign in 2019, and visitors to the headquarters at 24760 West Seven Mile Road will see one for Benita and another one honoring her mother. Benita was an active and supportive DST member for over 50 years. Benita was a devoted member of historic Second Baptist Church when she lived in Detroit. She often visited the church during her many visits to her hometown. Benita was preceded in death by her parents Lee Ethel Williams Brickouse and George H. Brickhouse. She is survived by her sister Joyce, her brothers George H., Jr. and Keith, her nephews Anthony, Warren (Rick), and Jacsyn; and her nieces Debra, Leslie, Kimberly, and Maya. as well as numerous great nieces and nephews, great-great nieces and nephews, and godchildren. She also leaves behind her very close family friend Barbara James-Petersen, thought of as a sister, with whom she pledged Delta; G. Luz James II considered a brother: the entire James Family, and many other St. Croix families whose ties with the Brickhouse Family extend back to the 1960s. Benita also leaves behind dear friends Cynthia Hunt, Julia Robinson, and Gail Page Grange, along with Sorors, and others to cherish her memory. The funeral service will be held at New Hope Missionary Baptist Church, 1201 New Hope Lane, Winston Salem, NC 27105 on Saturday, July 24 at 10::00 AM. Family hour 9:00 AM. Interment at Piedmont Memorial Gardens, Winston-Salem, NC In lieu of flowers, please honor Benita’s support of Delta Sigma Theta’s educational mission by donating to scholarships by the Minerva Education and Development Foundation, at PO BOX 21655, Detroit, MI 48221 or online at medf.net.

Benita Brickhouse passed away at home in Ohio shortly after celebrating her 70th birthday. She was born June 30,1951 in Detroit to Lee Ethel Williams Brickhouse and George H. Brickhouse. She chose her final resting place beside her mother and... View Obituary & Service Information

The family of Benita Brickhouse created this Life Tributes page to make it easy to share your memories.

Benita Brickhouse passed away at home in Ohio shortly after celebrating...

Send flowers to the Brickhouse family.