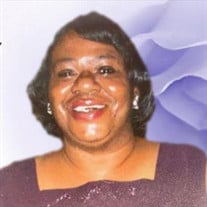 Anna Marie Henderson, 63, of Davidson County was born October 6, 1957 to the late Annette and Charlie Henderson. She transitioned from her earthly home on March 12, 2021. A devoted member of First Baptist Church, she was formerly on the Enrichment... View Obituary & Service Information

The family of Anna Marie Henderson created this Life Tributes page to make it easy to share your memories.

Send flowers to the Henderson family.